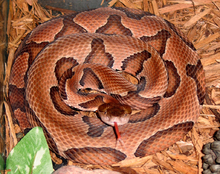 Snakes in Houston are not as deadly as people think they are. In fact, a few people die from a snake bite in the US. So stay calm! Venomous snakes are not as hostile as people perceive them to be.

The most dangerous snake in the area is the Texas Coral Snake which belongs to the cobra family. Doesn’t it sound frightening?   Even though these snakes are composed in nature and are most likely to hide behind rocks and logs, in rodent burrows and will flee together rather than whistling or striking when they’re surprised, Never try to touch these snakes!  Texas coral snakes have a red-yellow color pattern on their body which can be described as red and black sections separated by gold rings. Generally, the height of these snakes ranges between 2 – 2.5 feet long. These beautiful reptiles mostly eat other snakes and small lizards and spend most of their time underground.

Southern Copperheads, also found in Houston are most likely to be seen nearby trees.  They are somewhat self-effacing snakes and have less poison than other dangerous snakes, and typically are not expected to bite us.  Although, all snakes aren’t venomous snakes, maintain some distance from them. In comparison to other harmful snakes, the Southern Copperheads generally devour on rodents, frogs, fish, lizards, birds, and large insects.

The Cottonmouth found in Houston is an extremely poisonous snake and holds a bad reputation for being hostile. However, a recent scientific study conducted on their behavior has shown that they don’t intend to bite when confronted. Their frightening whistle gaping mouth display, and rare habit of making a run in the direction of someone who has cornered them have influenced many to believe that they are more violent than they are. Cottonmouths are almost always found in or close to water. Often they climb on the low branches of a tree to sun themselves and also keep a watch for prey in the water below. They like to eat frogs and fish, but they are one of the few snakes that will forge for different kinds of dead animals, as well.

Snakes approach areas occupied with people in search of food and shelter. The easiest way  to avoid a snake problem is to make your home and yard less attractive to them. You can do this by eliminating their food sources like rodents and not leaving pet food outside, instead store the food in tight containers. Snakes like mostly cool, damp places to hide. Seal proof the entry points in your crawlspace or basement.

It’s better to call AAAC Wildlife Removal of Houston  to have a professional come remove a snake from your home as soon as possible to avoid dangerous circumstances.