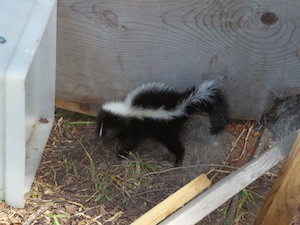 The cold temperatures are slowly heating up and more people are venturing outdoors to enjoy the lovely weather. It’s the beginning of spring and the earth is blooming. Though the bright new flowers and beautiful green grass are a sight for sore eyes, soon we will be seeing families of skunks. Don’t let Disney’s Bambi fool you. Though the skunk’s name is Flower, skunks are far from smelling as rosy as the new flowers blooming in your garden. At the end of winter, beginning of spring, skunks are starting to “twitter-pate”. If you haven’t been fortunate to watch Bambi as a child, “twitter-pating” is a term used for mating. It’s important to know a little bit about skunks. They can become a potential pest in your home. They look to your home for nice place to raise their little skunk babies, or “kits” in the animal world.

There are many different families in the skunk species (“Mephitidae”) that live throughout different parts of the world. The most common skunk we deal with in the United States is the striped skunk .

While skunks aren’t really known to dig in trash cans as badly as raccoons or opossums might, they are still very opportunistic eaters, meaning they have flexible diets and will eat different things correlating with the season . The most common favorites in a skunk’s diet include beetles, grasshoppers, grubs/worms, bird eggs, small rodents, frogs, fruits and berries, as well as mushrooms. Interesting fact: skunks have been known to occasionally steal a chicken for its meal. So while humans don’t need to be worried about being devoured by a skunk, it’s best to take precautions for poultry or even crops if you live on acreage where you grow food.

You won’t often see skunks in the middle of the day. They are normally off scavenging for food and looking for a potential mate for mating season during the night, or around dawn and dusk. Mating season is one of the only times skunks actually socialize with the rest of its kind.

It’s no secret that Skunks are stinky creatures, despite the ironic Disney movie which named its skunk “Flower”. As one of their main defense mechanisms, Skunks are known to spray a very foul smell through their anal glands. The smell can reach a person’s nose up to a mile and a half away, as most road traveler’s know. While the stench is harmless to humans and house pets, it can be difficult to remove. Most people say that soaking in tomato juice helps get rid of the smell; but in fact, all it’s really doing is masking the smell for a short amount of time. The best way to get rid of the stench is to use counteractive chemicals such as a mixture of baking soda and hydrogen peroxide; fortunately it’s a pretty easy method to remove the foul odor. Another interesting fact: skunk spray is highly flammable- so don’t go lighting a match behind the skunk as you will experience very stinky, fiery consequences.

AAAC Wildlife Removal of Houston can help you with all of your skunk removal problems. We will also help with the damage and the smell left behind by these animals. Call Us today at 281-688-1765.