We are Austin’s most gentle and complete wildlife service! 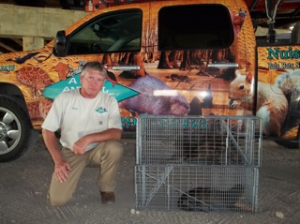 Austin bat control and removal continues year round due to the warm weather. Bats normally do not hibernate in Southern Texas as temperatures do not get below freezing very often. Once it freezes, bats cannot fly in these cold spikes and survive. Even the Big Brown bat is not able to provide enough body heat to fly in cold weather. A bat will normally roost in an attic space in 2 or more story building. They will roost in a 1 story building or home but that is not the rule, it is the exception. Once inside a building or home, the guano will start to accumulate. Guano is the bat droppings or waste that bats leave behind. This guano can make you sick and create an unhealthy house or building.

The bats simply cannot be removed and not addressing the waste issue. Austin bat guano waste removal is normally performed after the bats have been removed from a home or building. This waste can pile up high and we have removed piles as high as 3 feet! The weight alone of this guano is enough to fall through the drywall ceiling and come crashing down below. Occasionally bat guano will stain the ceiling and create an odor that is unbearable. It is sort of like a musty odor and as the temperature rises, the odor level rises. We have seen homes where the odor was so bad you could hardly stand to stay inside.

to fly. This normally is done between August – May. Bat pups are usually born in May and are able to fly by August. Once they are able to fly, a bat control and removal program can begin. A one way door system is normally installed to remove the bats and once they are gone, the cleanup process will begin and the guano removed. The guano will be sanitized before, during and after the removal process. After the removal, the attic can be reinsulated and any damage repaired. The entry points will also be sealed to prevent future bat entry.

The house or building must be properly sealed to ensure that bats will stay out. Bats when evicted will seek out new entry points and methodically try to get back into their roosting area. The Little Brown Bat is one of the most common species that live in homes with the Big Brown Bat being next. Sometimes huge colonies of bats are in attics and as many as 500 – 1000 are common. This many bats can create literally tons of waste over the years. Bats control is very important to remove this waste and bat control Austin will remove this problem bat.

One other issue with bats is the bat bug. A bat bug is very similar to a bed bug and lives on the host bat. Bats control will remove many of the bat bugs when the bats are evicted from the building. Bat bugs must be treated when you are complete with the project or they will move into the house or commercial building. When inside, they will bite humans and attach themselves to pets. Austin bat pest control will not use methods like ultrasonic bat control. This technique does not work and is a waste of your money. Do not buy products that claim they will make the bats go away with ultrasonic noises.

Pest control for bats will get rid of bats permanently if done properly by a bat control specialists. These wildlife professionals know the proper techniques to quickly remove them and send them packing. Many bat bird control problems result from a home or building in poor repair. The home or building must be properly sealed with bat proofing, exclusion or prevention techniques to fully solve this problem. Bat trapping is normally not a recommended method to control them. Bats are beneficial animals and trapping them normally ends up killing them. A better bat deterrent is eviction for bats in the attic. An ethical bat control service will not want to kill them and instead install a bats house or use other methods to get rid of a bat.

Bat pests can carry rabies. Rabies is normally fatal to an animal or human. Your chances of surviving rabies is extremely low if not treated within a certain period of time. Don’t attempt to pick up a bat dead as this is how many people get bitten. Children are particularly vulnerable to a bite as they innocently pick up dead bats and unfortunately the bats are not dead and bite the victim.

A pest control program for bat bird control pest should come with a warranty to protect you against reinfestation.

As we mentioned earlier, bat traps are a waste of time and effort. Why trap bats as they are very beneficial animals and should not be harmed during the removal process. Bat extermination is also not recommended and there is no proven bat repellant on the market to solve your bat infestation. We

know how to get rid of bats because getting rid of bats is our area of expertise. We are simply not a bat exterminator. There are many fly by night companies out there, so be careful in choosing a pro to help you.

Bats attic problems are real and have consequences if left untreated. A bat in a home or house is a potentially deadly situation if the occupant is bitten. Bats attic is a common problem in Austin and call for immediate action and a bat exclusion is necessary. Bat exclusion and proofing is the process to exclude or remove them and proofing is the process of keeping them out. Removal of bats and any urine or droppings also called guano is a service we provide as well. Bats removal takes anywhere from 1-2 weeks to repel or evict them. Bat repellent or bat repeller does not work. Again, don’t waste your money on these products. Bat attic devices that supposedly provide bats removal can be a scam. Ever see the plastic owls around? Ever see birds landing on them? Yes..They are worthless too.

Bat elimination is the ultimate goal and not bat poison. It is illegal to poison bats and unethical. You must remove bats to solve this problem. With all the new technology out there for bat eradication, you won’t want to waste your money on bats repellant either. Bats extermination is also not legal or ethical.

If you have never smelled a bat smell, it is similar to a musty or moldy smell. If you smell this, it means you have an excess of bat guano that a bat rodent has left behind. Bat damage to the insulation and structure by urine crystals eating away at the wood is a real problem. Urine contains salts which will eat wood and destroy the grain in it.

Bat removal is a systematic approach that follows specific guidelines. If the proper process is not followed, the bat removal program will not succeed. First, the bats must be evicted. Next, the damage repaired and the area cleaned. Then the entire structure must be sealed to conclude the bat removal process. Guano removal is usually performed by vacuuming out the attic or soffit area. Bat guano also called bat feces or bat droppings are a sure sign that you have bat problems or bats in attic. Do not install a bat trap or bat kill. An ethical bat control company will remove the bat infested area and may install bat netting.

Controlling bats with at bat repellant is a waste of your time and a waste of repellant. Besides, it might cause a bat killing of the bats pest and then you will have a dead animal odor to deodorize. Bats infestation and eliminating bats using bat repel the bats pests is another technique that will fail by using a substance that does not work. Only a bat control company will help you solve this problem.

Many people ask how to get rid of bats attic or how to get rid of bat that is living in a soffit or chimney. Take care of the problem as quickly as possible and make your home or business pest free and have a clean fresh smell with proper bat control odor control. No one wants to live in a home that has a terrible bat guano odor problem. Bat removal is the only answer to this most unpleasant situation.